A History of the Dutch Language 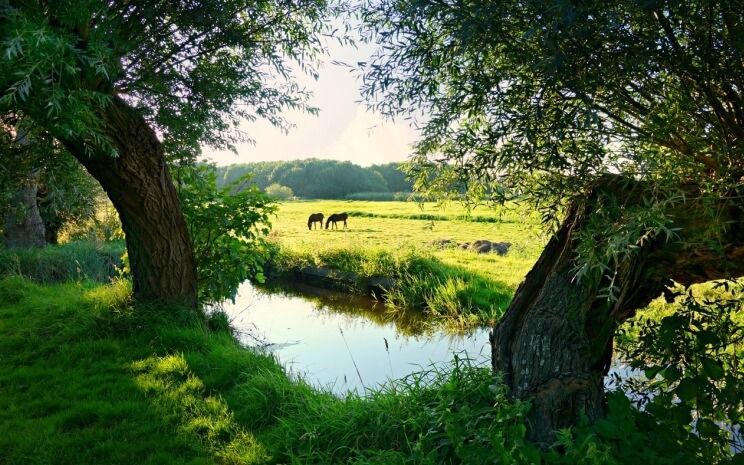 Like so many other northern European languages, Dutch originated from the old Frankish dialects of the Indo-European language tree as one of the Germanic languages. It shares a common ancestor with English, the Scandinavian languages and German, among others. The language that would eventually become modern Dutch began as the pre-Roman Proto-Germanic, undergoing several consonant shifts (described under Grimm’s Law and Verner’s Law by linguists). Unfortunately much of what we know about these early languages is conjecture, as no written text has been discovered in Proto-Germanic.

During the early middle ages, as Old English and Old Frisian developed in their own directions, the West Germanic Language family gradually began separating from each other and becoming more distinct in their own right. With the High German sound shift around 600AD, a distinct ‘Old Dutch’ began to emerge, spoken in at least three distinct dialects across what is now the Netherlands. Saxon dialects were largely spoken in the east, lower Franconian dialects in the centre-south and Frisian in the north. Almost nothing survives from the period between 600 and 800 bar a few place names and a small number of runic inscriptions, as reading and writing were not introduced into the area until the seventh century during the arrival of Christianity (and most texts at that point were in Latin).

Old Dutch developed out of the Franconian languages of this time, becoming recognisable to speakers of the modern language in around 900 and spreading across the Netherlands, northern Belgium and parts of the Lower Rhine regions of Germany. The inhabitants of the northern Dutch provinces and the coast of North Holland instead spoke Old Saxon, although it had much in common with Old Dutch. The oldest sentence that is identified as Dutch, ‘maltho thi afrio lito’, dates back to this period, from a Frankish document called the Salic Law written in 510. This sentence was used to free serfs. The oldest known word in Dutch is wad, meaning a river ford, written in Tacitus’s Histories.

Old Dutch developed into Middle Dutch by the 1100s, as a series of highly mutually intelligible languages spoken across the region. A process of standardisation began in the middle ages, partly backed by the Burgundian Ducal Court in Dijon and Brussells. In particular, the urban dialect spoken in Antwerp, Brabantian, became influential and then spread when Antwerp was invaded by the Spanish, carried across the region by refugees. Modern Dutch still strongly resembles Brabantian, and has in fact changed very little since this time. In particular, the translation of the bible into Dutch, the Statenvertaling in 1637, used elements from various dialects but was largely based on the form of the language spoke in Holland. It’s said that Dutch was born in Flanders, grew up in Brabant and matured in Holland for this reason.

While the Dutch language has remained largely unchanged from the 16th century onwards, modern Dutch grammar has become gradually simpler. However, many of the older forms of the language are retained in idioms and sayings from the middle ages.

While the language of the northern Netherlands remained unchanged, the Dutch spoken in the southern Netherlands (now Belgium and Luxembourg) underwent a number of changes as the Spanish, Austrian and French powers of the time invaded and occupied the region, bringing centralised standardisation to a halt. By the 19th century, the Flemish Movement in Belgium were demanding rights for Dutch speakers but were having difficulties with the various dialects compared to the more unified French-speaking majority. Belgian Dutch subsequently developed differently to Dutch in the Netherlands, although the difference is comparable to British and American English.

By the 17th century, the Netherlands had become a centre of global trade, with Dutch traders ranging as far as China and Japan. Dutch was one of the several major trading languages of the period and also became one of the languages of colonisation as Dutch settlers established colonies in the Americas (particularly north-eastern South America), South Africa, Indonesia, Malaysia and Central Africa. A number of colonial dialects and descendent languages developed in these far-flung colonies, most notably Afrikaans, the South African dialect. Afrikaans is spoken in Namibia, South Africa, Botswana and Zimbabwe, and evolved from the Dutch vernacular of Southern Holland as spoken in the Dutch Cape Colony. While it incorporated loanwords from multiple other languages including local Bantu, Afrikaans is still 90% mutually intelligible with Dutch. It also incorporates elements of Portuguese, one of the other major trading languages of the era. Afrikaans was not highly regarded by mainland Dutch speakers, referred to as ‘Kitchen Dutch’ or even verkeerd Nederlands (lit: ‘Incorrect Dutch’) as late as the mid-20th century.

The countries that still use Dutch as an official language are almost all ex-Dutch colonial territories, the Verwantschapslanden (‘Kindred Countries’). Dutch is also one of the official languages of the UN, the Union of South African Nations, the Benelux region and the Caribbean community. In addition, a wave of early 20th century Dutch emigration means that up to half a million Dutch speakers reside in the US, Canada and Australia. While Dutch has always been surrounded by larger and much more culturally dominant languages, it’s likely that it’ll continue to be a language of trade and industry for some time to come.

To find out about our Dutch Translation Services, please click here.