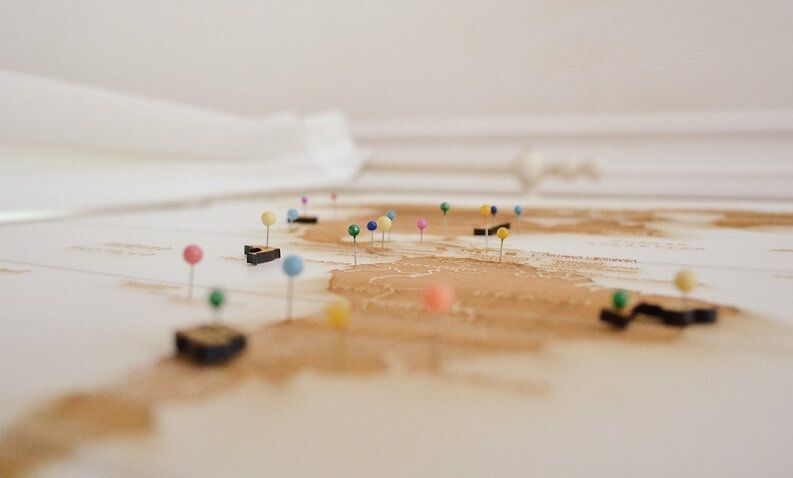 A language is considered ‘dead’ when it has no fluent native speakers remaining, and extinct when no complete records of it remain.

Languages have died off or changed beyond recognition throughout history, but in the past 200 years this process has rapidly accelerated. General consensus suggests that between 6,000 and 7,000 languages are spoken worldwide, and that between 50% and 90% of them will have become extinct by 2100. At present, the top 20 most commonly spoken languages worldwide are spoken by more than 50% of the world’s population with more than 50 million speakers each, while the remainder have an average of less than 10,000 people.

Languages die for many reasons. Political pressure, economic stress, prejudice, globalism and neocolonialism have all reduced populations of native speakers to nothing in the past. This has been particularly prevalent among Native American and Australian languages, which were both deliberately and inadvertently suppressed and forgotten as the colonisation process continued. Elsewhere, as Europe’s economies become more centralised and communications technology improves, European minority languages are becoming more and more rare.

What do we lose?

When a language dies or becomes extinct entirely, humanity as a whole loses more than just a means of communication. Fluency in a language is required to understand all the art, literature and culture that uses it, as well as the understanding of the world and even way of thinking that it creates. Entire philosophical concepts can die with the last native speakers.

There’s also a scientific aspect – traditional medicines and knowledge are sometimes irrevocably lost when a language goes extinct. Pharmaceutical researchers often end up having to identify plants with medicinal properties from scratch, unable to apply the centuries’ worth of knowledge that was available in the local language as there aren’t any native speakers left to ask. A similar process can occur with unique environmental and survival techniques.

In addition, communities and social cohesion as a whole suffer when languages are lost, with cultural traditions and a sense of shared identity disappearing. This is particularly prevalent in communities where the language has been deliberately suppressed, and can contribute to the loss of political legitimacy that minority groups need to preserve their rights. Removing or destroying a language is one of the tools used by dictatorships and extremists throughout history – the Nazis are as always one of the most prolific examples of this, but the United States of America and the British Empire (and various sub-states and spinoffs of the same) were both guilty of forced cultural assimilation via enforced education of aboriginal and native children, Chinese and Asian immigrants and African immigrants and slaves.

What can be done?

Preventing languages from dying out can be difficult. It’s often an academic exercise, one which has to push against either inherent or indeed explicit political and social pressure and opposition. One of the largest efforts to preserve endangered languages is being run by UNESCO, which maintains the Atlas of the World’s Languages in Danger. Another is the Endangered Languages Project, part of the larger Alliance for Linguistic Diversity, a collection of organisations around the world seeking to preserve lost and dying languages.

Individual activists and academics have sought to preserve languages, often their own or those from their culture. In a TEDx talk at UTA, linguist Colleen Fitzgerald describes the efforts of Jessie Little Doe Baird, a Wampanoag linguist who has taught herself and her daughter to speak the Wampanoag language, which fell dormant despite the large amounts of written record that remained. Barry Moses is doing something similar for the Salish language. This sort of grass-roots preservation among communities can help preserve language as a curiosity, but recent technological innovations may lead to preservation on a more permanent footing.

Particularly in terms of the native American languages, preservation through technology is nothing new. As Fitzgerald notes, the Cherokee made heavy use of printing presses to create and preserve their literary tradition in the 1800s, preserving it through the US government’s abuse of their people.

Many obscure languages were used during the First and Second World Wars by “Code Talkers”, mainly Native Americans (along with Basque speakers, Welsh speakers and speakers of the Wenzhou Chinese dialect), as a way to frustrate enemy codebreakers while communicating. Cherokee is now one of the available languages on many computer operating systems including Microsoft Windows, thanks to lobbying efforts from Cherokee activists.

As technology allows modern culture to fragment into thousands of connected sub-cultures, there may be space for speakers of endangered languages to connect with others and teach what they know, while machines offer the potential to preserve languages for future reconstruction.